UNDYING
Marnya is a novice, traveling to a teaching enclave to expand her healing talents. But her life is changed forever when her traveling party is attacked by brigands. In defending herself and her friends, Marnya is critically injured--but she does not die. She thinks she has hidden her remarkable healing from everyone, but two of the soldiers who rescue the novices belong to the Order of Kilvordi, and they know her secret. She is one of them, an Undying. 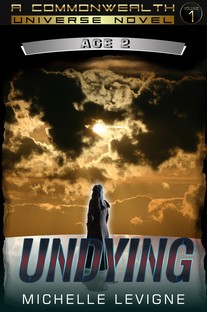 Raf and his friend, Danal, give Marnya her first lessons in what it means to be an Undying--unwilling heir of the genetic engineering that helped bring about the Downfall of First Civ. All the members of the Order are Undying, and under the leadership of High Scholar Kilvordi, their quest is to reclaim the lost knowledge of the ancestors and take civilization back to the stars. Marnya joins the Order and sets out on her journey of learning and healing and leadership.

As the years go by, a new enemy arises from their own ranks--Undying who believe they were born with their gifts to become rulers, not guardians. They want to dominate, to enslave the ordinary Humans around them. And if they have to destroy the Order to accomplish their goals, they will.